Out of the fire of war a quiet man walks, full of thought. “Syria was like heaven on earth,” he says to me.

I’m sitting with Fouad, a sweet and serious man wearing a crisp sky blue shirt in a little mosaic workshop in Madaba, Jordan. Strong Middle Eastern sunlight streams onto walls and shelves crowded with hundreds of mosaics, an ancient art form made with tiny bits of colorful stone. The workshop is loud, but Fouad is quiet. While the six other mosaic artists talk and laugh, he thinks. 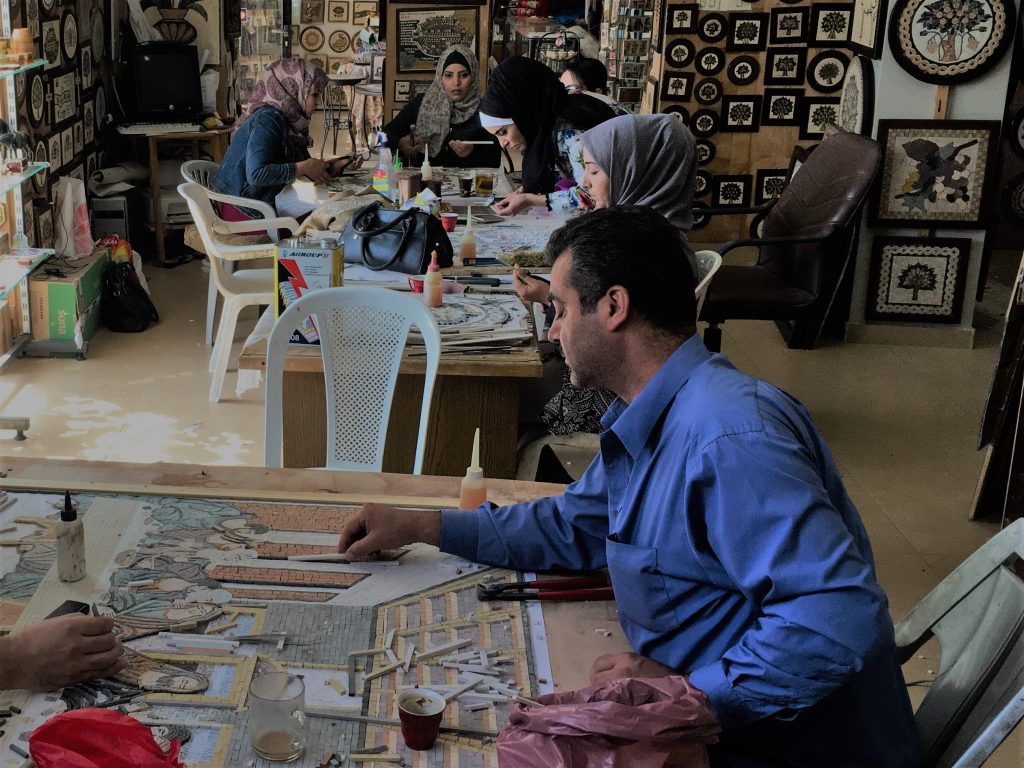 Cutting a thin piece of green stone into small, square pieces which drop onto the tabletop, Fouad tells me he’s from Idlib. This is a province in Syria on the southern border of Turkey where more than 100,000 remaining survivors have been pushed by the war. The forces who are fighting have come to Idlib too, to try to drive these people into Turkey, or to kill them.

Four years earlier in 2013, as the war blasted on, with people running and people fighting, some because they wanted to and others because they had to, Fouad came to Jordan to save his family.

He had planned to stay for six months and send his wife and five children money once he got a job. They had stayed behind in Idlib with hopes, as everyone hoped, that the war soon would end and he could come home. But Fouad knew if his country’s situation grew worse, it was more likely that he could pull his family into Jordan once he was inside rather than try to push all seven of them into the country while he was still in Syria.

It was early enough in the war that he was able to enter Jordan with permission to live and work like anyone who wasn’t from Syria. In the little city of Madaba he found a job as a mosaic artist. In Idlib, he had worked as a mosaic artist too. Early in the war he’d also owned a supermarket until a bomb crashed into it. A monster of a bomb weighing 800 kilograms it, remarkably, malfunctioned and did not explode. His friend owned a supermarket as well. “Come at 8:00 in the morning,” he said to Fouad, “and help me open.” Fouad overslept until 9:30, then hurried through the streets to the market as a bomb careened through the air. It exploded into the supermarket and killed his friend, like it would have killed Fouad.

Safely in Jordan at his new mosaic job shortly after he arrived in the country, he climbed a tall ladder to hang a piece of art high on a wall. The ladder teetered, then collapsed and threw him onto the floor. The gentle man from Idlib who’d narrowly survived his exploding city was now lying on the ground with a broken leg in Madaba. For six months he couldn’t walk.

What is usually safe can cause more harm than what is always dangerous.

Fouad struggled to recover while his family dodged the shells that burned their home in Syria. There was no work for his wife, but his children were able to go to school. Then they were pulled out of school by people who didn’t want anyone to be educated anymore. One day they were allowed to return to their schools, but then they were bombed and that was the end of their education in Syria.

His family’s hopes of staying in Idlib vanished as the war grew, and their hopes of fleeing to Madaba vanished as Jordan closed their border with Syria. Fouad couldn’t walk, but he could fill out forms. After eight months, he was able to get passports for his family. This helped but not enough, as passage into Jordan was still forbidden. But Idlib became too dangerous for them to stay. Fouad told his family to go to the border and wait.

His wife and children began moving from place to place. Fouad lost contact with them as they traveled south through the desert, along with other Syrians hoping to cross into safety. After 18 days camped out at the border, Jordan allowed Fouad’s family into the country as refugees.

They were put into Zaatari refugee camp, the largest Syrian refugee camp in Jordan, with a capacity of 80,000 people. In a small space with a kitchen, bathroom and floor of sand, they lived. They had a door but no knob. It wasn’t good and it wasn’t safe.

After too long in Zaatari, they were able to leave and be with Fouad in Madaba. As he talks to me, his wife and children come to visit and watch him work, quiet like he is. Today the rest of his family is still in Syria – three brothers, three sisters, cousins, aunts and uncles. Some have died, and those who are still alive can’t get out.

Before he’d fled Idlib, Fouad had quickly trained to become a nurse. Afraid the government would punish them for helping people damaged from the war, many other nurses in Syria were quitting their jobs. It was too dangerous. Fouad worked as a nurse for two years, saving the lives of people he didn’t know. Now the rest of his family needs to be saved, and it hurts him because he can’t.

Precisely and carefully this man from Idlib picks up the pieces of blue, red, green and black stones scattered across the table and glues them onto a flat piece of varnished wood, soon to be a mosaic. While the war at home destroys, in his workshop he loves to create. Fouad pieces together his mosaics like he wants to piece together beautiful lives for the people of Syria.

Yahia Hakoum is a 32-year-old student from Damascus, Syria whom I met in Egypt in…