Jordan is a tribal country. All Jordanians are members of tribes. These are not primitive tribes as we tend to think of the word tribe in the Western World. A tribe in Jordan is a huge extension of one’s blood relatives, and its members number in the thousands or tens of thousands. One of the most important members of a tribe in Jordan is its mokhtar. The role of a mokhtar is not very well known to Jordanians. So while in the small city of Madaba, I visited a mokhtar named Maher Fahr Haddadin in his home, and as we drank mint tea in his living room he and his family explained to me the role of the mokhtar in Jordan.

The leaders of tribes in Jordan are Sheikhs. Mokhtar, which means chosen or leader in Arabic, is the position immediately under sheikh. The existence of the role of mokhtar in Jordan dates back to the Ottoman Empire. They are a sort of liaison between the people and the law. They fix problems that ordinary Jordanian citizens cannot. In other governmental systems in other countries what could take weeks, months or years to resolve a mokhtar can fix immediately with no delay or problem.

Mokhtar Maher is a member of the Haddadin, a tribe which originated in Yemen.  The Haddadin are 100% Christian and, numbering about 50,000 Jordanians and Palestinians, are one of the largest Christian tribes in Jordan. In Madaba where Moktar Maher lives, percentage-wise there is a larger Christian population than in most of the rest of Jordan, but the Haddadin exist all over the country.

Five years after Maher retired from his job, the acting mokhtar of the Haddadin tribe wasn’t able to continue. The tribe looked to Maher because of his honesty and his experience working with the government and private industry. Becoming a mokhtar was not Maher’s idea. He never wanted to be a mokhtar. He did not run for office. But his tribe wanted him, they voted him in and that was it.

As a public figure, Mokhtar Maher lets his people know where they can find him.  There is a sign on the wall in front of his home telling people who he is.

If any of his people have a problem or an issue, it doesn’t go very far. When Mokhtar Maher is contacted by someone, the issue can be solved the same day. The concept of one man having an elected position with the power and authority to routinely fix other people’s problems in as fast as an hour was hard for me to grasp, but this actually does happen in Jordan.

A mokhtar is more familiar with his people than the country’s government and  tribal sheikhs. Mokhtar Maher is much loved by his people and so effective in his role in part because of his emotional proximity to his people. Every day he goes into Madaba to make himself visible. He talks to his people, listens to them, and helps them.  He’s accessible, he understands his tribe and wants what is best for them.  “He feels what the people feel,” his nephew Omar says, “because he’s in the street always.  He can see all the problems.”

In his home office Mokhtar Maher has preprinted papers which prove he is a mokhtar and stampers imprinted with different terminology for every situation which may arise. When someone needs him to help, he takes his paper and relevant stamper to the judge or other authority who is in charge of the situation. He informs the authority of the issue, presents his identification document, signs and stamps the papers needed to end the situation, and that is it.  There is no more problem. 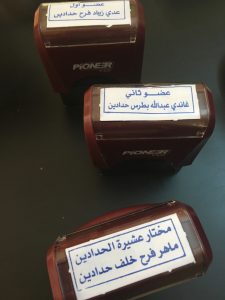 You don’t have to have trouble to receive the assistance of a mokhtar in Jordan. They help people on a personal level as well.  If someone needs money for university tuition, a mokhtar will accompany you to an entity from which you can borrow money. He vouches for the fact that you do indeed need this money. You will then likely get the money.

If someone owes someone else 10,000 Dinar, they can go to their mokhtar and ask for help. What Mokhtar Maher might do in that situation is ask a charity organization for the money, and they typically will give it to him.

It is good thing that Mokhtar Maher treats his people so well and is so effective in his job. Because once someone is appointed as mokhtar in Jordan, they are a mokhtar forever.

What Travelers Need to Know About Jordanian Culture

As travelers, it’s always a good idea to learn about the local cultures of the…