Very little is written or known about a certain aspect of the culture of *Upper Egypt ‑ the tradition of revenge killings, also known as blood feuds or vendettas.

One of the Connect the Cultures partners, Joseph Nazir, is a native of Upper Egypt, born and raised in the village of al Kosheh within the town of Dar el Salam, located in the governorate of Sohag. Joseph understands revenge killings, and when he was a child got caught in the middle of one.

Here Joseph speaks about what he experienced on that day. After his story, I have interviewed him to get more details about the tradition of revenge killings in Upper Egypt.

(Please understand that this tradition of revenge killing does not exist anywhere in Egypt except for Upper Egypt, and when it occurs there it is only in rural regions away from tourist areas.)

In Upper Egypt guns are something normal. Every house has a gun. Not just every house. Every child knows how to use a gun, and some have their own guns.

When I was a child, five or six years old, there was a war like this between two families in our street. My little sister and I were inside our house with our mom when it started. My dad wasn’t there, he was working.

There was a fight going on outside our door. Families were shooting at each other. I was sitting with my mom inside the house, scared. There were a lot of guns. The shooting went on for about an hour or two. We had a dog. She was running around inside the house, barking.

Our house didn’t have a roof. My mom and my sister and I were in one of the corners of the house. My little sister was crying, and mom was holding her and me to her chest as we hid in the corner.

So far no bullets were coming through the walls into our house, but we were expecting at any time that one could go inside, like through the top where there was no roof. Still it was safest to stay in the house, so we stayed.

Finally the fighting stopped. My dad came home. He was really worried. About me, especially. My father and I were very close. Later we heard two people had been shot, and we finally were able to leave the house. In the evening we found out that one of these two men had died.

The next day everything was normal, like nothing happened. They took the dead man to the grave and that was it. But the family of the killer knew revenge was coming.

Interview with Joseph about Revenge Killings in Upper Egypt

Sabina – Why do revenge killings exist?

Joseph – Revenge killings are for family honor. If you kill my brother and I don’t kill one of your family, I will be ashamed in the village. Everyone will be talking about me and say he’s not a man. He couldn’t do it. He’s not a man. It’s for the honor of the family.

Sabina – Are revenge killings a tradition for Muslims or Christians or both?

Joseph – The revenge killing that my family got caught in was between two Muslim families. However, this revenge is going on with both Muslims and Christians. It’s a cultural thing. It has nothing to do with religion.

Sabina – Do the police ever get involved in revenge killings in Upper Egypt?

Joseph – The police would love to interfere, but they can’t interfere. If I kill your brother and you want to kill me, you will not tell the police I did it. You will just wait until you have a chance to kill me.  Someone gets killed in the middle of the day, and no one tells who did it. No one in the village will go and tell the police who did it. It’s a cultural thing. The police have nothing to do with it.

Sabina – Who typically are the victims of revenge killings in Upper Egypt?

Joseph – Only grown men. Not the women, not the children.

When a boy is young, he cannot be killed in a revenge killing. The enemy family has to wait until he’s grown to kill him. When you have a boy and you feed him and you take care of him and you make him a man and then he’s killed, it’s worth more to the family who kills him. His family worked hard to make him a man. Especially if he becomes something, he studies and becomes something in life. Then he is worth more.

Sabina – What is the funeral for the victim like?

Joseph – The family of the victim takes him to the cemetery and buries him like anyone else. However, the tradition of revenge killing does not allow the family to hold a funeral for him. His family must wait until they take revenge and kill a man from the enemy family. Only then can they have a funeral for their family member. Of course this could take years to happen.

Sabina – How long does the tradition of revenge killings in one family go on?

Joseph – Revenge killings can go on for a long, long time, decades and decades. It doesn’t stop until someone in one of the families wants to stop and agrees to go through a ceremony to officially halt the killings. This is the only thing that can stop it. Other than that, it will never stop at all.

Sabina – What is this ceremony to stop revenge killings?

Joseph – One day the family whose turn it is to kill will decide to stop. They don’t want to kill or be killed anymore.

Someone from a third family, someone who knows the two families who have been revenge killing each other, will then step into the matter. He will go to the family whose turn it is to have someone killed and he will tell them that the first family wants to stop. The second family is required by tradition to accept the decision to stop.

Then a ceremony to stop the revenge killings takes place. All of the village will go into the street to watch it happen. It’s a party.

The person who wants to stop the killings will walk through the village as everyone watches, carrying his white funeral garments in his arms.

So this man walks to the home of the family with whom his family has been feuding. He lies down in front of the man of the family and says here I am. I’m dead. I’m yours. You can do whatever you want with me.

However, it’s shame for him. If the second family were to kill him, it’s better for him than to tell them he wants to stop. He has to have a lot of courage to do this because it’s a big, big shame.

The man from the second family will have a knife in his hand. He has a choice of whether to kill this man with his knife or to do something else with the knife. Most of the time the man doesn’t kill him. I’ve never heard of them killing the person.

This is for peace. Both families want peace. They don’t want to kill. So the man chooses to set the other man free for peace. Also, because it is so shameful to be the one to say let’s stop the killings, for the second family it is enough that he has done this. They don’t need to kill him. Because in Upper Egypt shame can be worse than death. 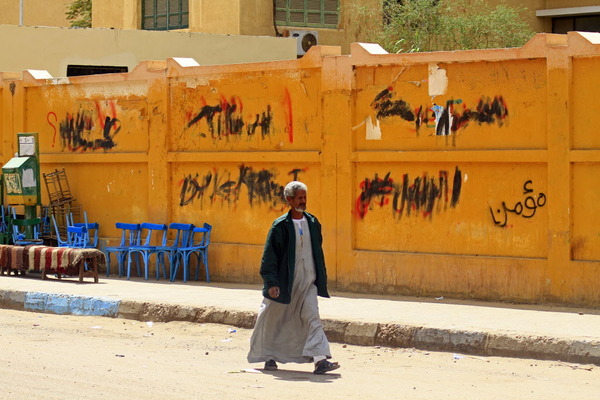 Interview with Joseph by Connect the Cultures creator, Sabina Lohr