Weekends in Israel don’t really exist. Most Israelis don’t stop working until Friday afternoon and then start back up again Saturday night or Sunday morning. This short period of rest, from sundown on Friday until sundown on Saturday, is the Jewish sabbath, called Shabbat (pronounced Sha BAHT) in Hebrew. I’ve spent Shabbat in Tiberias, Israel maybe 100 times. Here is my perspective, as a non-Jew, of Shabbat in Israel. Some Israelis may find this comical, but this is how I see it.

The Jewish areas in Israel shut down almost entirely on Shabbat. In Arab areas such as East Jerusalem, Nazareth, Arab villages and the West Bank/Palestine, things slow down a bit on Friday, but they don’t shutter everything closed and come to a total standstill like in Jewish Israel. It is business as usual on Friday and Saturday in the Arab parts of Israel.

In Tiberias, which is a majority Jewish city and where I’ve spent a good deal of my life, on Fridays things get very tense. Until the afternoon, most people work. Then as everyone finishes their workweek, almost all businesses – banks, supermarkets, restaurants, gas stations – close for about 24 hours. There are isolated areas near Tiberias where you can find a gas station or a small shopping center open, but that is it.

This is a problem, as there is almost nowhere to buy groceries or anything else until Shabbat is over. On Friday afternoons rushing crowds fill supermarkets to maximum capacity, leaving nowhere to park in the lot and nowhere to maneuver inside the store. People trying to do last-minute banking freak out when the bank closes while they’re waiting to get inside. Aggressively honking cars multiply precipitously. Buses, one of the primary forms of transportation in the country, stop running. So on Fridays for Shabbat in Israel, people must get everything done and get where they want to go very fast. The scene is frenetic.

I believe because Israelis get very little time to rest from the workweek, this causes stress which exacerbates the tension that already exists inside this country.

When I was first living in Tiberias in 2011, I could always see and feel the tension on Fridays but didn’t realize that Friday nights are pretty special here. They are the only night of the week that Israelis can stay up late and not worry about tomorrow. Israelis spend Friday nights in many different ways. When one of my secular Jewish friends, whom I’ll call Doron, started taking me to Shabbat dinners at his family’s homes, this is the type of Friday night I came to know.

Many Jews, both religious and secular, spend Shabbat in Israel enjoying a traditional sabbath dinner with their family. Before the dinner, at the onset of Shabbat, two candles are lit at their home and remain lit until Shabbat ends the following evening.

Two loaves of challah bread lie on the dinner table, representing the two days of Shabbat. A glass of wine is poured and a prayer book called a Siddur is set at the head of the table. One of the oldest men at the dinner puts on a kippa, also called a yarmulke, and recites from memory a prayer in Hebrew. This person then takes a sip of wine and passes it around the table so each person in order of age, oldest to youngest, can take a sip. Then we eat. 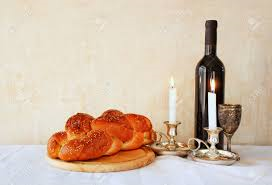 Shabbat dinners in Israel are kosher. Or supposed to be kosher. Keeping meat and milk separated is one of the criteria for kosher food. One time several years ago when Doron and I were invited to Shabbat dinner at his sister’s house, he was in charge of providing the lamb meat.  I discovered this meat lying in a pan in his refrigerator, marinating in milk. I don’t think his sister knew about this. This is normal for Doron.

A couple of very enjoyable Shabbat evenings I have spent with Doron and some of our Muslim friends in an Arab village in northern Israel. And this past Friday night instead of eating shabbat dinner with Doron and his Jewish family, we ate dinner at his home in Tiberias with a Muslim Palestinian woman from East Jerusalem. This is also normal for Doron.

Shalom means peace and shabbat means sabbath. On Fridays, instead of saying good-bye when people won’t see each other again until after Shabbat, they say Shabbat Shalom, meaning have a peaceful sabbath.

It is Friday afternoon in Tiberias as I write this now.  So Shabbat Shalom from Israel!