Month four of my three-month journey back to the Middle East was all about the Sinai.

Originally, at the beginning of 2017, I had planned to spend three months in Egypt, Jordan and Israel. However, I was forced to leave after six weeks. So I decided to pick it up again later in the year and divide my three months into two equal parts. I returned in September, flying in to Amman, Jordan, and then ended up staying in the region for ten weeks. So my three-month trip stretched into four months.

I’ve already published some of the stories and articles about Part 2 but not many, yet. I decided to anoint 2018 as a year of major transition for myself, so every day is very full for me now. The posts about Part 2 of my 2017 time in the Middle East are coming slowly, but they are coming.

Since I’ve returned to the US I’ve written an article to help travelers understand a bit about Jordanian culture so trips to the country can be completely enjoyable and free of misunderstandings. This article is based on my own thoughts as well as an interview I conducted with Sami al-Hasanat, former Jordanian parliamentarian and current tour company owner.

I also wrote a piece about my new Syrian friend now living in Jordan, after he shared with me his experiences with the war in his country.

Here’s a bit of what went down during Month 4.

Month four began as I crossed the border from Israel into the Sinai, as I have many times before. This time, not as many times before, there was a line of tourists. I ran to the front so I wouldn’t have to wait behind a bus full of Indians. This was the first time I’d seen more than a couple of tourists crossing from Israel into Egypt in many years.

Since the tourists disappeared from Egypt after the Revolution, the arrivals building in the Sinai had become so comprehensively deserted that it was scarcely operating. Not only were there no tourists but most of the staff had dematerialized as well.

For six years I had to roam all around the inside of the tiny building listening to my “hellos,” echoing off walls. I moved down hallways and glanced into offices to see if I could find anyone to stamp my passport.

One time after I did find a couple of people who worked there, I had to wait to leave the building because of a visa issue. For over two hours I sat on a bench. During that period of time one other person walked through. One. He wasn’t even a tourist. I think he was with the UN.

Now is a funny time for tourists, though, to be reappearing. While mainland Egypt is growing safer, the Sinai has become increasingly dangerous. The towns in the South Sinai, where most tourists head, are still safe, including Dahab. But traveling through the Sinai desert is a bit riskier than previously. The major danger is in the North Sinai. I don’t think tourists are allowed to enter this region. On November 24, a couple of weeks after I arrived in Dahab, ISIS blew up a mosque filled with Sufi worshippers in the North Sinai, killing approximately 312 people. This was the deadliest terror attack in Egyptian history.

If you do travel through the Sinai, your driver will likely be Bedouin, which is good. Not only are most Bedouins genuinely good people, but because of their power and authority in the Sinai, if ISIS does appear at some point along the journey, your driver can realistically attempt and may actually succeed in protecting you. Also, if you’re American like me or in the same vehicle as an American, you will be followed by a vehicle full of police. Shortly after Trump was elected, he met with Egypt’s President Sisi who then enacted a new law which mandates a police escort for all Americans traveling through the Sinai. So this could help you out too.

Dahab is home to me, but there are always new finds. Every Friday there’s an event called Friday market, popular with locals and expats, where both groups gather to sell goods, primarily jewelry and food. Russians love the Middle East and are all over the place, including Dahab. I’m starting to get into their food, and one new find for me was some strange yet gorgeous Russian salads at Friday market.

I stay close, as always, to the tour company I worked at in 2011 and 2012. One of the most important people to me in Dahab now is my Bedouin girlfriend. I spent a lot of time with her in her family’s arisha. One night she let me try on her niqab. 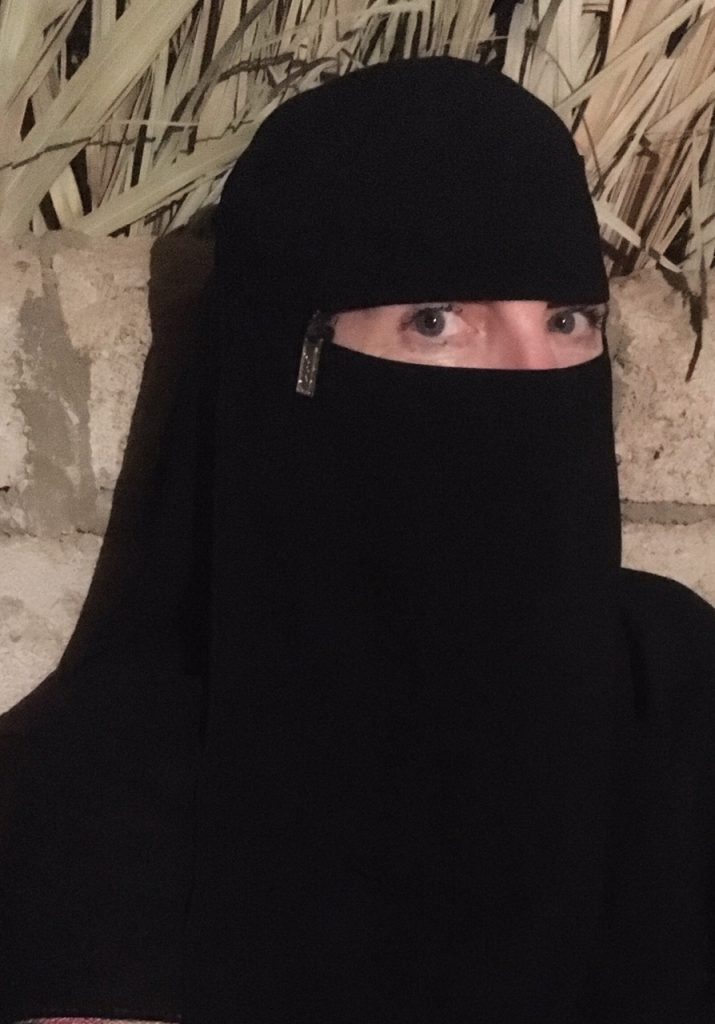 Of course I spent time with Hemaid, as always. I shot another video of him during which he gives a tour of his neighborhood, beginning with his garden and ending at his parents’ arisha for tea. I will be uploading this to the Connect the Cultures YouTube channel soon.

Hemaid recently launched his own YouTube channel on which he shows the inner workings of Bedouin life in Dahab. There are no other videos of this life, in the world.

Speaking of Russians and YouTube, shortly after I returned home I remembered I have another scarcely-touched YouTube channel I abandoned years ago. On this channel I had posted a video of Russian baby yoga, which used to be a thing in Dahab.

In this form of yoga, Russians hire an expert to twirl and hurl their infants around in the air, frequently concluding by throwing the baby into the Red Sea. They say it is good for their health and makes them strong for life. Of course some of them die.

The Russian baby yoga people don’t seem to like cameras. So one day I stood behind a door, and I was able to get a pretty clear video. I was surprised to see this video now has almost 12,000 views. I think this is a lot of views for an abandoned channel.

I am, of course, already in the beginning stages of planning my return trip. This will involve unravelling a court case in Israel.

A few days before I left the country, I went to the courthouse in Nazareth with my Jewish lawyer friend. He was not trying a case but, rather, was involved in a supreme court case being tried by my Arab lawyer friend and five other lawyers. This case centered around my Jewish friend’s Jewish friend, an extremely violent criminal who was currently out of prison and sitting in the row in front of me.

At a critical point during the proceeding, my Jewish friend said he had to go to the bathroom. He  reached into his briefcase, pulled out a three-page document written in Hebrew, handed it to me and walked out of the courtroom. I held the paper in my hand until the hearing concluded. My friend never returned.

The criminal had appeared nervous, scared and miserable throughout the hearing. After the conclusion, he was happy and leaping around. This is not good.

The three-page document written in Hebrew is now lying in one of my desk drawers at home. I do not read Hebrew. I will be packing the document carefully and taking it along with me when I return to Israel. I will give it to my Arab lawyer friend, ask him what it says, and also find out exactly what happened that day in the courthouse in Nazareth.

BACK IN THE USA

Readjusting to life in the US every time I come back is just hard. I very rarely come across Americans when I’m in the Middle East. My connections to my family are the only communications I have with people from my home country. I spend time only with Egyptians, Arabs and Jews. It is really difficult on an only 12-hour flight to pull myself out of a Middle Eastern frame of mind and push myself back into a American frame of mind.

The opposite is far easier. Adjusting back into the cultures of the Middle East happens immediately. These are not just my friends. These are my people. As I begin the plans for my return, while also working on my current life and my future life, I feel lightness in my heart. I love my life in the US, I love my life in the Middle East, and the time is not long before I will be with my people again.