One of the young Bedouin women I’d met sitting in a circle around a fire the other day invited me back to her arisha for more tea. Her house is in a recess amongst the other Bedouin homes and not very visible, so she tells me she’ll meet me at the beginning of the narrow sandy path that leads to its broken red wooden door. As soon as I turn onto her road I see her at the end waiting for me, dressed from head to toe in black like most Bedouin women in public. She’s tall with silky skin and honey-colored eyes. Her name is Rose.

A mangad, the square metal frame that holds the fire on which Bedouins heat coffee and tea, sits on the floor of Rose’s arisha, a tented area at the entrance to Bedouin homes. We sit crossed legged and sip tea out of small glass cups and coffee out of small ceramic cups, the all-day and all-night ritual of the men and women of this culture. 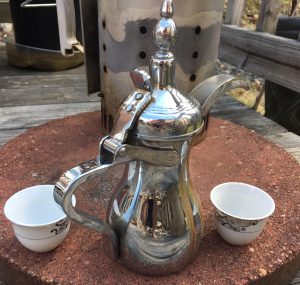 Rose lives with her mother and father in a home crowded with so many younger siblings they’re a blur. In the Arab world people don’t move out of their family’s home until their parents arrange their marriages. Rose is already 21, so I think she will be married soon and move into her own home with peace and space.

She tells me she’s going to university to learn to teach Arabic to grammar school children. Most young Bedouin women will spend their lives focusing on their homes and children, so Rose is privileged.

When her university studies began, it was in the city of Al Arish. This is the most dangerous city in Egypt. On the southern border of the Gaza Strip in an area which is very difficult for the government to get under control, ISIS is a prominent presence. Sitting in her classroom, Rose listened to bombs exploding outside.

Al Arish is hard to get into and hard to leave. There are army checkpoints all over Egypt, and the checkpoints at Al Arish are extremely serious. The soldiers are full of questions, Rose tells me. Their questions are easy – who are you, where do you live, where are you going, why are you going there, what will you do once you arrive – but Rose didn’t like it. No one does. But not that many people travel to Al Arish, so not that many people have to answer the questions.

It was too dangerous for her to continue to live there, so her father pulled her out and put her in a school in the South Sinai near the safe, quiet town of Nuweiba. She’s on a short break from her studies now.

I begin visiting her every day. Then she tells me she expects to leave Sunday to go back to school. I tell her I’ll miss her and she says she’ll miss me too.

Sunday I go to say good-bye. I’m unhappy to be losing my new friend so soon. Rose is already in my heart. But she tells me she’s not leaving that night after all. Alhamdulillah. We can spend one more evening together. She will leave the following morning.

I come by the next morning to say good-bye. She tells me she is not leaving that day either. She doesn’t know why. I’m relieved we don’t have to say good-bye today. Instead, we sit and drink tea and coffee for hours, her brothers and sisters crawling and running about the arisha. More small children climb inside to beg Rose to teach them how to write their names. Not now! she tells them. She wants to spend time with me. Tomorrow I go, she says.

The next day I visit again. Rose is still at home. Everything is staying the same, and she doesn’t seem to be going anywhere.

What’s happening? Will you go to school or will you stay here? She thinks for a few seconds. Probably they will bring books to me, and I’ll study at home.

She tells me then that her father lets her go almost nowhere except the homes of relatives. She’s never even been inside any of the neighborhood shops. She shrugs when I ask what she thinks about her movement being so restricted. I don’t mind. I later learn this isn’t true. Rose does mind.

She starts taking me with her when she visits her cousins and her friends. We come out of the nearly private back roads that lead to her small concrete home and walk onto the middle roads which lead to the paved outer roads on which many vehicles travel.

Since I’m beginning to understand the culture of the young Bedouin women of the Sinai a bit, we’re both concerned that she might be spotted and get into trouble with her father. The back roads are narrow and very nearly completely silent but the middle roads are wide, with a little Bedouin pedestrian traffic and an occasional car or bike. Rarely a tourist will even mistakenly wander into this area. Many young Bedouin women come from families who don’t believe that they should be seen by men outside the family, at all. So traveling by foot even on the middle roads is risky.

When she sees a man in the distance, she pulls the sheer black sheyla that covers her head and face down over her eyes so it’s less likely she’ll be recognized. Many women in the more conservative cultures of the Middle East cover their eyes these days.

We walk to her cousin’s house and eat koshary, the signature meal of Egypt, sitting on cushions on the floor of the living room, which is the Bedouin way.

The next week we walk to the home of another cousin who sells dresses and hijabs in her arisha, and we have fun trying them on for over an hour. One evening at another cousin’s home we sit on the floor of the living room watching a TV show where thin young men in dishdashas (the long white robe worn by men in the Gulf countries) are sitting on the hood of an expensive black sports car riding around and around the driveway of a huge gated estate, eating ice cream cones. I don’t understand what’s going on. Rose explains that it’s a Saudi Arabian reality show.

We make it from home to home without anyone seeing her who isn’t allowed to see her. We think. What about eyes possibly peeking through a window or around one of the walls that surround the homes? But for now it’s okay.

When Rose was a little girl, like many other Bedouin girls and a few Bedouin boys, she learned how to weave colorful threads into beautiful bracelets. When she’d created a dozen or so, she and her sisters and cousins would run up to the seafront and spend hours trying to sell them to tourists. Rose hasn’t forgotten how to turn thread into jewelry and one afternoon tells me to hold out my index finger as the sun begins to set in her arisha and her mother bakes bread in the corner.

Rose weaves blue and red and white in a circle around the tip of my finger, then stretches the thread out long and twists into into a complex and attractive pattern. I realize she’s purposefully designing this bracelet with the colors of the American flag, for me. 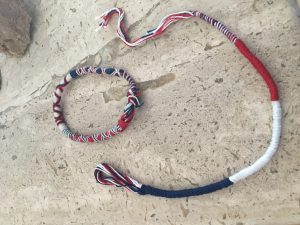 Her English is very good and I know a small amount of Arabic, but when Rose has something important to say, she doesn’t want a misunderstanding. She types her Arabic words into a translator and shows them to me in English.

Like all Bedouins, Rose is Muslim and now, after I put my new bracelet on, she asks me what my religion is. I say I’m Christian. She doesn’t know the word. I type it in English, and then she understands. She says she had a Christian friend, a German woman who had spent time with her family a few years ago and promised she’d come back to see them but never did.

I watch her pick up more spools of thread, purple and green and black, and start winding them around a stick instead of my finger. I want to take the thread and sew her the most beautiful life in the world.