It is like Christmas, said the man in the shop.

I was in a small market in Tiberias, Israel buying a few groceries just before the Jewish holiday of Yom Kippur in 2011. The man who spoke this sentence did so in response to nothing I said. He simply noticed, I suppose, that I did not look Jewish and may not have known that that night was the beginning of Yom Kippur in Tiberias.

I was living in Tiberias at the time, and although I did know Yom Kippur was beginning that evening, as a non-Jew I didn’t understand what it was about.

But I found out. Israel takes its holy days very seriously and this is the holiest day of the year, thus the Christmas comparison of the man in the shop. Yom Kippur means Day of Atonement, a day to sort of, in my view anyway, suffer in order to make up for the sins of the past year.  Because in my home country of America we try to enjoy all of our holidays to the fullest, in large part by eating and drinking as much as we can, the concept of observing a holiday by refraining from enjoyment was strange to me.

Fasting is a major component of Yom Kippur. Most of Israel’s population are secular, yet a television news report I saw before the holiday said that 63 percent of its Jewish people say they fast during this holiday, refraining from both food and drink.

On Yom Kippur in Tiberias and the rest of Israel work is forbidden and everything is closed.  Again, while in America we do everything we want to on our holidays, on Yom Kippur in Israel you cannot even watch television. I don’t mean that you are forbidden by Jewish law from watching television. I mean that the country cuts the television signal so that it is impossible for you to watch television. Alone in my apartment on Yom Kippur in Tiberias, with all shops closed, all friends celebrating with their families, I spent part of the approximately 25 hours of the holiday clicking with amusement through channel after channel of nothingness on my TV. Oh, and the country cuts the radio signal too.

As with other holy days in Israel, including the sabbath (called Shabbat in Hebrew) religious Jews also stop using their phones, as do some secular Jews. So basically the country of Israel goes radio silent on Yom Kippur. Fortunately, the country does not cut the internet signal.

But the most noticeable aspect of Yom Kippur in Tiberias and the rest of Israel are the empty streets. Driving is not illegal, but it is forbidden by Jewish law. Do not drive if you are in Israel on Yom Kippur! On this holiday streets and highways ordinarily packed with traffic are completely without cars. Totally empty. You can go lie down in the middle of the street or on the highway on Yom Kippur in Israel, and you’ll be fine.

On my first Yom Kippur in Tiberias in 2011 I wanted to experience the wonder of the city’s congested downtown streets now devoid of traffic. So in the afternoon I took a walk from my mountaintop apartment to downtown. Along the way I walked in the middle of the street rather than on the sidewalk, because I could. Little children were with me in the streets, riding their bikes and playing.

After I got to see the 100% empty streets of downtown Tiberias, I  walked back up the mountain. During the hour and a half round-trip journey I saw only two police cars with flashing lights, then another car making its way around with its hazard lights blinking.

When I later told someone that I did actually see a non-police vehicle on the street on Yom Kippur in Tiberias, she said they must have had their hazard lights on to avoid having rocks thrown at them. Some of the country’s very religious Jews take a real dislike to the occasional secular person who breaks the Yom Kippur rule of not driving. 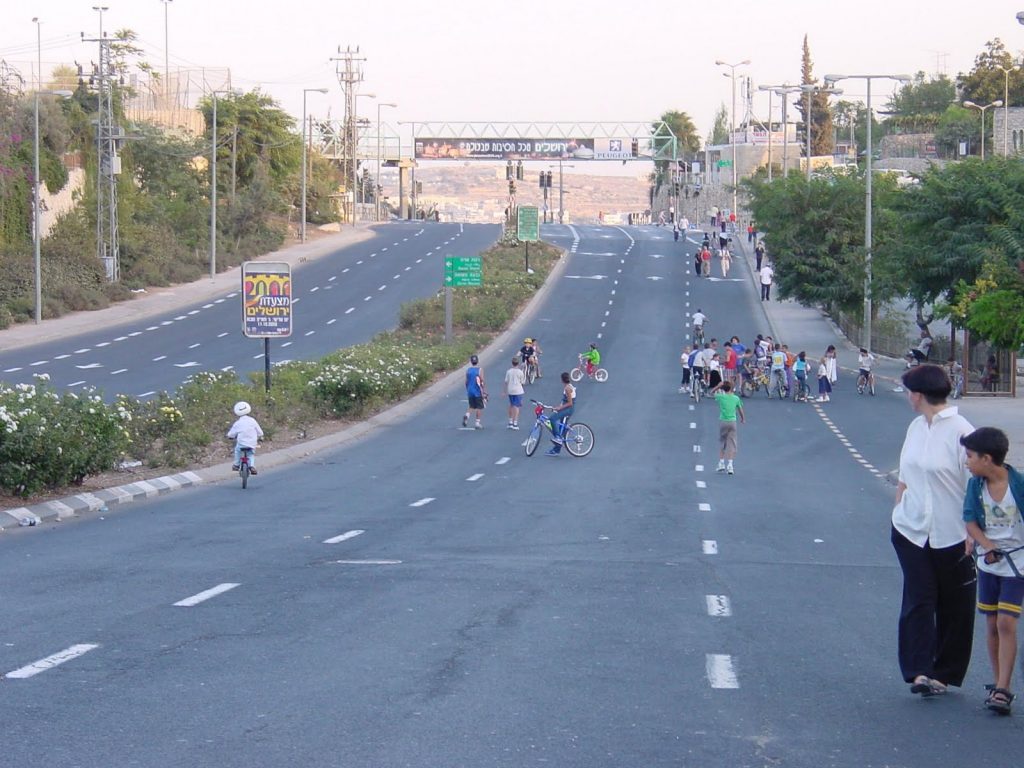 A year or two later, when I was back in Israel for a couple of months, I ran into two vacationing American guys on the street the afternoon before Yom Kippur in Tiberias began. They had just heard something was up, a holiday was coming, but they didn’t know what it was about. They stopped me and asked.

I explained to them that it was the holiday of Yom Kippur and there would be no bus service, no taxis, no driving allowed. There would be no television.  All shops would be closing soon, so if they wanted food they should stock up right now. They began to look a little panicked.

I walked off, leaving them to figure out how to handle this unexpected day-long downtime during their vacation. While it would be an inconvenience for them, to me it was another holiday in Israel that I was ready to enjoy. A major holiday. Just like Christmas.