The Jewish holiday of Sukkot arrives in October each year, immediately following the Yom Kippur holiday. This is one of the many Jewish holidays that Jewish people understand and enjoy while the rest of the world has no clue.

My new Jewish friend Claire Blumenthal falls into the first category. She celebrated Sukkot in Israel when she lived there for six years as well as in her home country of America her entire life.

As a Christian, I fall into the second group. I’d heard of the holiday Sukkot but had no idea what was going on once it arrived when I was living in Israel in 2011.

Here are our tales of Sukkot in Israel and the U.S. I’ll start with mine because it is the most rudimentary of experiences which gives me an opportunity to write about the background of the holiday.

Experiencing Sukkot as a Christian (by Sabina)

A few days after the Jewish holiday of Yom Kippur, when I was walking around my neighborhood in Tiberias, I noticed tent-like structures appearing on people’s balconies and in their yards. 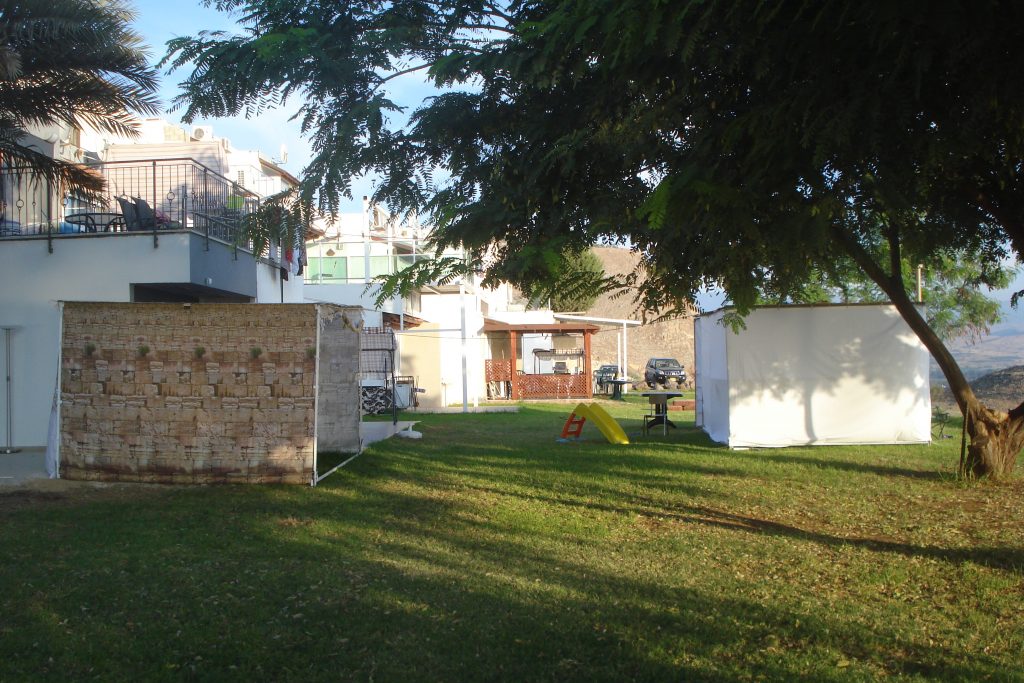 Hmm, what was this? Time to google and ask around.

I learned that this type of structure is called a sukkah, Hebrew for “booth.” Sukkot, the name of the holiday, is the plural form of this word. These booths are replicas of the temporary homes that the Israelites lived in while they wandered for 40 years in the desert after their exile from slavery in Egypt. Religious Jews build sukkot in commemoration of this period of their history.

A sukkah typically is comprised of cloth or wood walls and has plant material, such as palm fronds, for a roof. All of the ones I’ve seen during Sukkot in Israel are made of cloth. 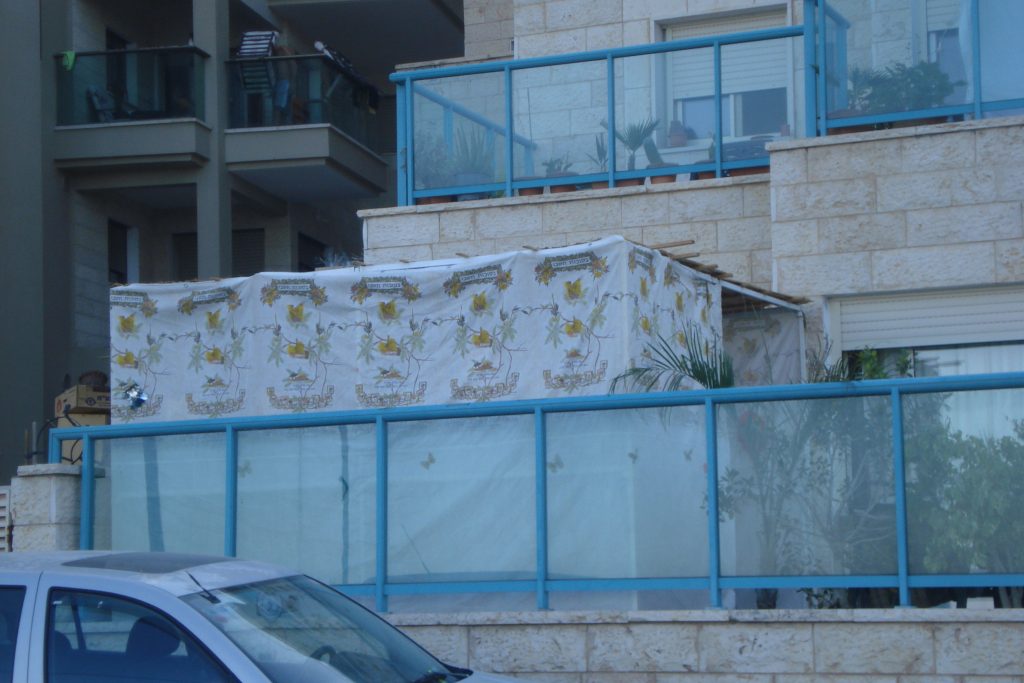 You can see the outside of sukkot easily. But what does the inside look like? There was a sukkah on a sidewalk down the street from where I lived, so I rationalized to myself, knowing it probably wasn’t true, that maybe it’s for the general public. I walked inside, and what I saw was interesting but pretty plain. 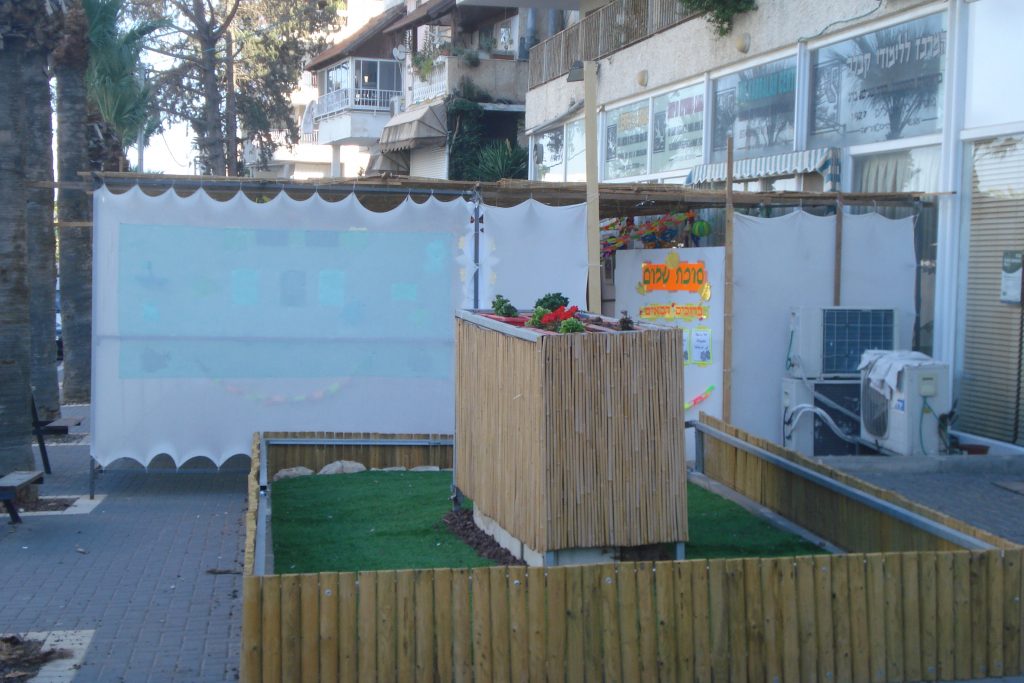 So I looked up fancy interiors of sukkot on the internet and found this. 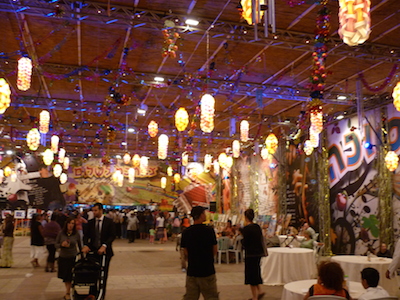 Down the street every day I passed by the only sukkah of this type I’ve ever seen, at the entrance of a home, so everyone who visits apparently must pass through it. 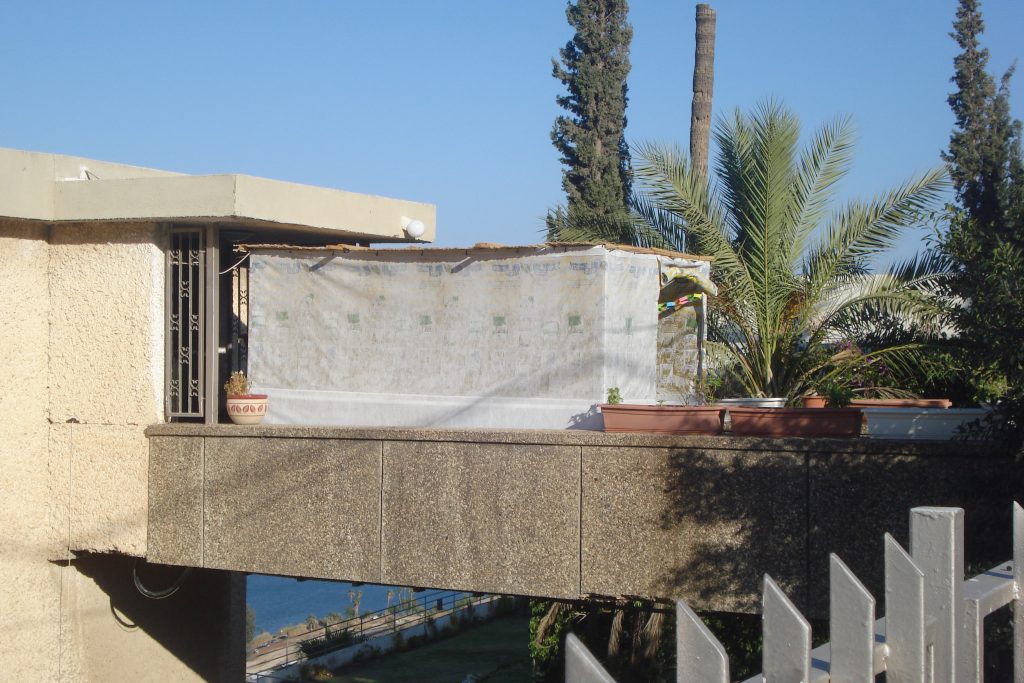 Unlike most Jewish holidays, which are very solemn and difficult, Sukkot is uplifting and joyful for the Jewish people.

Looking back over the notes I kept during Sukkot in Israel in 2011, I wrote that I found it “pretty enjoyable.” Not because a lot of people are off of work and in a holiday mood and not because there are holidays sales. But because I could hardly go anywhere without seeing a sukkah, and they were new and exciting to me.

Experiencing Sukkot as a Jew (by Claire)

When we lived in Indiana, USA, my mother had a sukkah in front of the patio of our house. These guys began paving the street in front. One day as my mother was walking to the car, they came up to her. They had been looking at the sukkah for days.

“We’ve been trying to figure out what’s in this tent over there,” they said to her. “And we’ve come to the decision that the only thing you could have in there are crocodiles.”

Crocodiles in Indiana. Yes, indeed. This is an excellent example of how non-Jews have no idea whatsoever about Sukkot.

Claire moved to Israel and became Haredi (an ultra-religious Jew, also known as Chasidic) for six years. Here’s how she experienced Sukkot in Israel as a Haredi Jew.

When you’re religious, Sukkot in Israel is a time to party with your family. It’s eight days of intense happiness and joy after ten intense days of praying for forgiveness during the preceeding holidays of Rosh Hashanah, (the Jewish New Year) and Yom Kippur (a very intense time where you try not to do any sins and try to get God’s forgiveness for the whole year of doing sins.)

When Sukkot comes, you just want to party. You are so happy you lived through those ten days.

For Sukkot in Israel as a Haredi Jew you build a sukkah and then move a table and chairs, a couch, the basics of living into it. The men are supposed to act like it’s their house for eight days. They stay inside it most of the time, even sleeping in it. Haredi women don’t have to do this.

On the last day of Sukkot in Israel, called Simchat Torah, religious Jews express the joy of having the Torah. In synagogues men sing and dance with the Torah for hours, and it’s hard core. The women watch.

The way you wish people a happy Sukkot in Hebrew is by saying Chag Sameach. So enjoy this video of Haredi men dancing with the torah, and Chag Sameach!

By: Connect the Cultures creator Sabina Lohr, with Claire Blumenthal